How much can you top up an Ioniq in 10 minutes from a Polar Ultracharger?

To answer this question, I tried out a Polar Ultracharger at the Holiday Inn Swindon, in the UK. The charger is quite close to J15 of the M4, and while the M4 is fairly well-served for charging, it’s on the Electric Highway network which is, how shall I put it, a little creaky right now.

The charger is a fairly new device, it’s one of Chargemaster’s own Ultrachargers. The nominal charge rate is 50kW. I easily started a charge using my Polar Plus card, and took photos as the charge progressed. 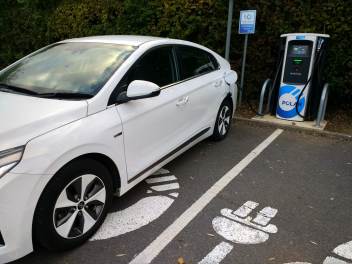 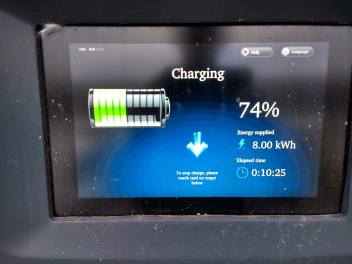 The car was at 53% charge when I started.  The charger was running at an average of 45kW output throughout (using figures from the charger). After 10 minutes I had added 8kWh according to the charger, 21% according to the car. Using a motorway range of 130 miles, 21% of that is 27 miles added in 10 minutes, and costing about 3p/mile.

Compared to the Electric Highway chargers I used last week, the rate is higher – 33kW is average for EH chargers on CCS plugs.

Using a nominal capacity of 28kWh, a 21% top-up represents only 5.88kWh. Taking the 8kWh figure above, this would be only 74% charging efficiency. Now Genovese et al report a rapid charging efficiency, for a Leaf, of at least 78% so this doesn’t seem quite right. Maybe if the battery is more like 30kWh then the efficiency would be in a similar ball-park. 21% of 30kWh is 6.3kWh and 79% efficiency.

The message here is to look at your car dashboard, not the charger, if you’re in a hurry to charge, and want to know how far you can go!

The same reference suggests that charger efficiency drops at higher state of charge, so I might see a better figure if I charge from a lower starting point. To be concluded…