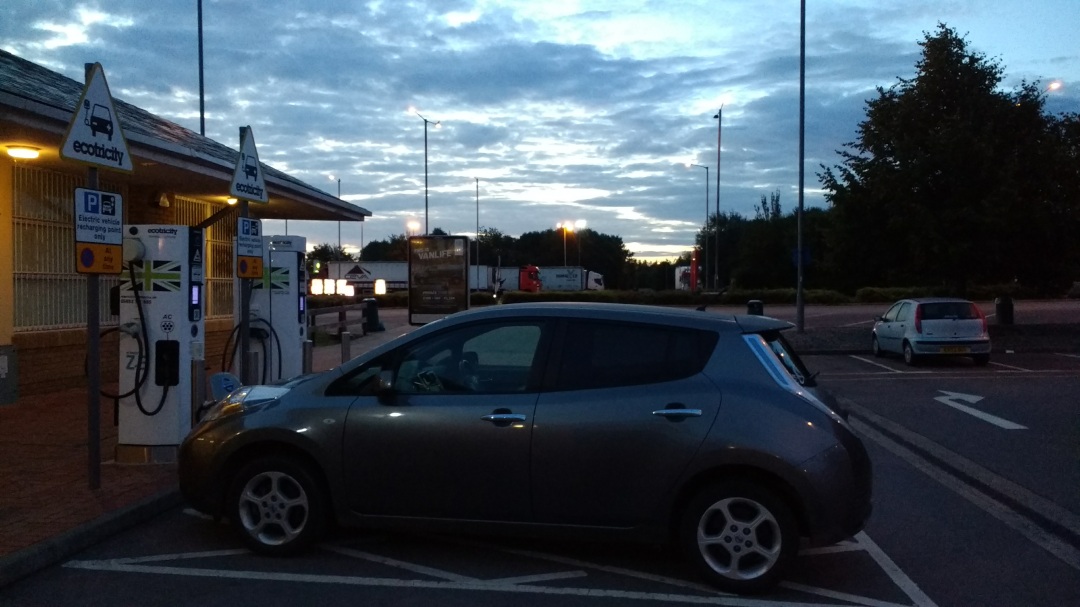 Many EV drivers have noticed that newer “Rapid” chargers can deliver a lot more power than the older models. So how do the older and newer chargers compare, what does the charging profile look like, and how long does it really take?

Not all “rapid” chargers are created equal. Some date from 2012/2013 when Nissan and Ecotricity installed chargers on UK motorways. More recently, companies like PodPoint have installed rapid chargers at supermarkets and other locations. The headline so far is always “50kW charging” but this is rarely achieved…

The early DBT-manufactured chargers could manage around 40kW charging a Leaf. Back when a Leaf had a 21kWh battery, this power was reasonable I think. A full charge, say 20kWh, could (in theory) take a little over half an hour. In practise it took longer because the charging rate drops as the battery charge increases. Then came the Leaf 28 and now 38kWh models, and suddenly a 40kW rate seems modest, for example a 30kWh charge at this speed would take a minimum of 45 minutes.

I recently used two different rapid chargers, and charged from roughly half-full in my 2013 Leaf 24. Between the two charges, in the car sat in the sun parked during some warm weather. The battery temperature increased with the ambient.

This chart shows the State of Charge and Charging Power, with time. The blue lines show the Ecotricity charger (made by DBT, located at Reading East) and the red a PodPoint charger (made by ABB, at Slough Tesco). 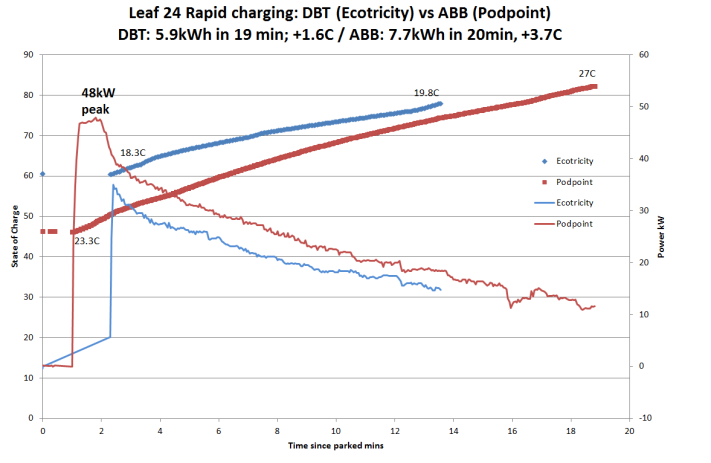 Although I did see 48kW on the ABB charger, this was for a very short period.

Note the dip in power at 16 minutes, this was caused by turning on the air-conditioning!

The charging speed is noticeably different between the two chargers; the average rate is 18.6kW (Ecotricity) and 23.1kW (PodPoint). (These figures are reported from my accounts with the companies, since not all the data was captured in the LeafSpy app). However the PodPoint charger was quicker to start, I had power within a minute of parking my car, rather than 2.3 minutes with Ecotricity. This is thanks to a slicker smartphone app. Ecotricity require you to connect onto their wifi, add the charger ID code, and add some card details, every time. So the effective rate including “faff time” is slightly  more in the favour of Podpoint –  16.6 vs. 22kW, or a difference of some 30%. Both rates are rather less than I expected!

Battery temperature is a “topic of interest” currently; you can see that the higher charging rate increases temperature more than the slower charger, around 4C for 8kWh.

These average figures are low, despite an impressive 48kW burst from the ABB charger, because I was starting from a high state of charge. Also this is a 5 year old battery.

Plotted as State of Charge against Charge Power we can see that at high state of charge, above say 70%, there is little difference between the two chargers. The charge tapering significantly from a 50% state of charge is noticeable, and was not something I expected. However a bit of googling shows similar charging profiles, tapering roughly linearly from 50 to 60%. 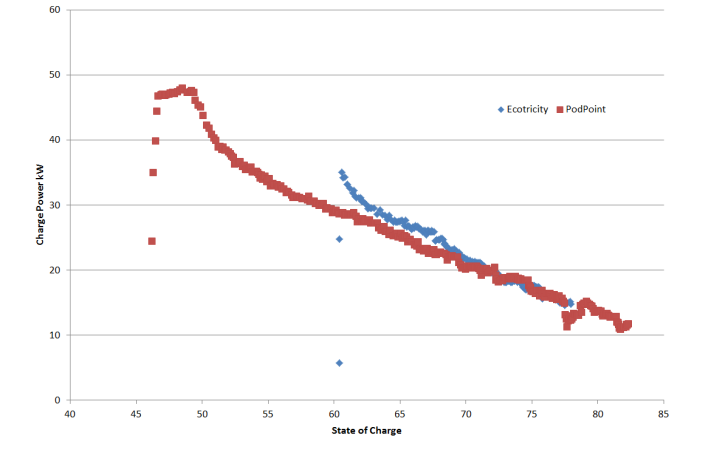 This 20 minute charge added around 35 miles. This really isn’t very impressive (when your other car is an Ioniq).

So, for a 5 year old Leaf 24, we can conclude that charging rates depend mostly on the state of charge of your battery, and not necessarily the peak power that the charger can deliver. On a route like the M4 with lots of chargers, the fastest progress would be to run the battery much lower than I did, and charge more often and faster. This of course risks finding unserviceable or blocked chargers, however.

The faster charger here (ABB) was chosen because of its convenient location on the day, and it also happens to be cheaper, at 24p/kWh compared to 30p/kWh.

It’s absolutely possible to have a rapid charge started in one minute from parking, as I did with PodPoint.