“I didn’t know that” – facts about the Nissan Leaf

The CEO of Nissan staked the future of the company and 4 billion Euros on a mid-size all-electric car, the LEAF is the result.

LEAF is an acronym, Leading Environmentally-friendly Affordable Family car. But we’ll stick with “Leaf” shall we?

The Sunderland factory in the North-East of the UK has made Leafs for Europe since 2013, including battery pack assembly.

The car’s heating (or air conditioning) can be set on a timer, or activated from your phone, so that you never have to defrost your windscreen again!

The Leaf uses a very conservative, custom battery design, resulting in no battery incidents in 3 billion miles (according to Carlos Ghosn, at CES Jan 2017). Just under half the battery weight is the flat Lithium Ion cells (150kg) made by a Nissan-NEC joint venture. The rest is aluminium battery cases and a steel outer box.

Even though the Leaf’s battery weighs some 300kg, overall the car weighs about the same as a recent VW Golf or Mini Clubman.

Used Leaf batteries are intended for Nissan’s home energy storage product to store your solar power for use later on, for example in the evening.

Leafs make great taxis, some have done over 150,000 miles in few years. A taxi fleet in England has over 50 Leafs.

You can throw a full size bike in the back, after dropping the rear seat backs, without taking the wheels off! 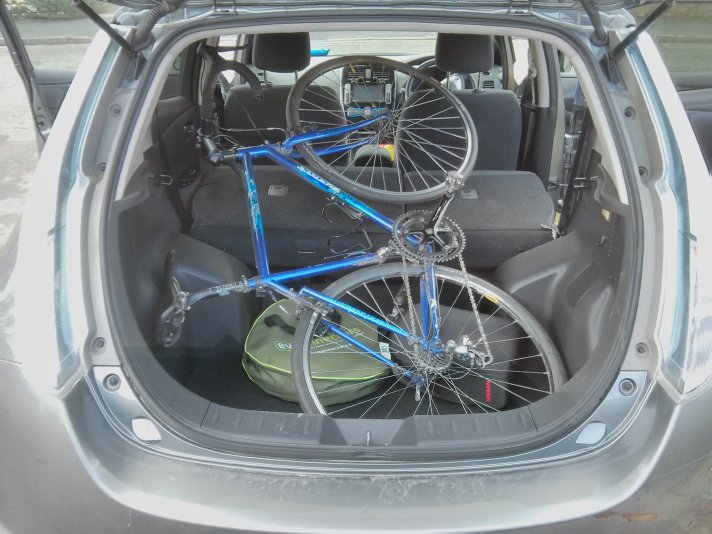 The battery pack extends from under the front seats all the way back to under the back seats, and is almost as wide as the car.

Leafs are made on the same assembly line as petrol cars, as the motor and electrics package has been designed to be a similar size as a petrol engine

The Leaf has aluminium doors and bonnet to save weight. Don’t try to stick magnetic signs on them 🙂

The Leaf has no gearbox to change (or wear out). There is only a reduction gearbox with a fixed ratio.

The heat pump heater fitted to Gen 2 cars gives more heat output than the electricity it consumes (as do all heat pumps, including your fridge)